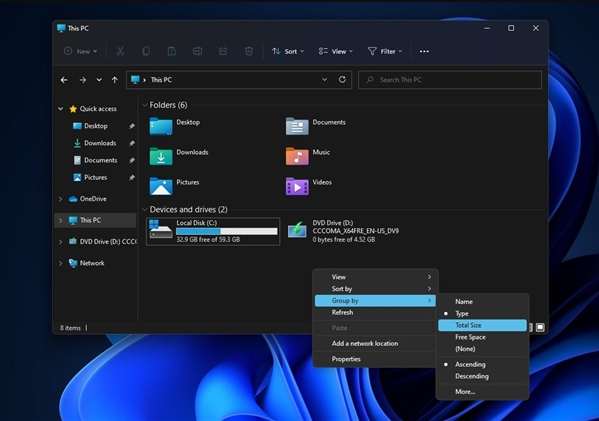 Most tech companies always want to change user habits. We were told that the new changes are awesome and cool. They don’t care if users like the changes or not. This time, Microsoft finally did something to adapt to the user’s habit.

Recently, Microsoft’s table layouts will be adjusted to optimize the Windows 11 context menu in a later update.

It can be said that this is one of the most anticipated updates for almost all Windows 11 users.

In Windows 11, Microsoft has greatly redesigned the context menu which is the same as in Windows. The new right-click menu looks more concise and more beautiful, but this simplicity and beauty is based on the destructive impact on the user experience. from.

In the context menu of Windows 11, a large number of functions are included in the secondary menu , which has caused many users to report that the Windows 11 context menu is difficult to use.

Kuai Technology is informed that in the subsequent Windows 11 version update, Microsoft has plans to change the context menu child menu and enable a new child menu layout.

Schematic diagram of the new context menu layout in Windows 11

Microsoft said the new sub-menu will improve call efficiency, in order to resolve user feedback about the slow and cumbersome operation of the context menu.

Also, the new submenu will adopt the same design style as other user interfaces in Windows 11, making the new submenu cleaner and cleaner. but the problem is that the new submenu of the current trial version will ignore the user-defined emphasis. Color, but insist on showing blue.

Although Microsoft did not officially reveal how long this process will take, Some people believe that this update will be included in the Windows 11 version 22H2 update in October 2022.

In addition to the optimization of the context menu, Microsoft also plans to fix the frequent crashes caused by the taskbar and file explorer in Windows 11. This repair patch will meet with users in the next two weeks of updates.