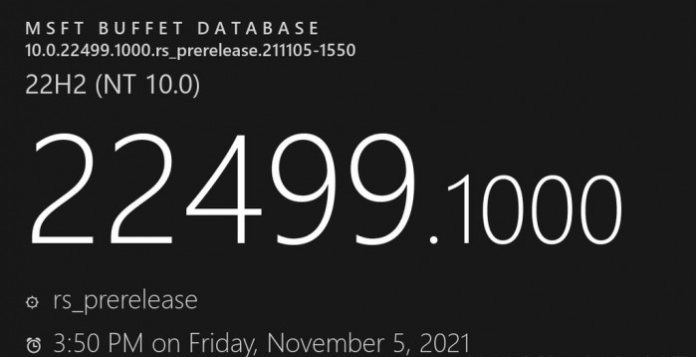 For the dev channel users in the Windows Insider project, the Microsoft development team today released a preview version of Windows 11 Build 22499. In this update, Users can directly share open application windows on the taskbar with Microsoft Teams calls. Additionally, today Microsoft also released the ISO image file of build 22499.

In the version released last week, Microsoft introduced the ability to quickly mute / unmute Microsoft Teams conference calls directly from the taskbar. Today, Microsoft announced the expansion of this experience to be able to directly share open application windows on the taskbar with calls from Microsoft Teams.

This experience, which also started with Microsoft Teams, eliminates the need to switch between apps to share or re-share a window. There is no interference with your meeting platform or what they see on the screen – share the open windows of your phone.

When you make a conference call through Microsoft Teams, simply hover your mouse over the running application on the taskbar and you will see a new button that allows you to share your window with the conferencing platform. When you’re done sharing your content, hover over the window again and click to stop sharing, or select another window and click to share this window. If you’re doing a full-screen presentation in PowerPoint, just move your mouse to the bottom and the taskbar will appear so you can share or unshare the presentation without affecting attendees.

According to the comments, Microsoft is making the keyboard focus visuals in Task View and Alt + Tab more prominent, so they are easier to see.

● Once you enter this version, the clipboard history should resume normal operation.

● When you click gifs in the emoji panel, they are now inserted into the supported apps, which is different from the previous version.

● Updated background dictionaries in multiple languages: Text suggestions and automatic corrections on the touch keyboard should now be more accurate.

● If you change your accent color, the accent in the emoji panel should now also change instead of remaining the original color.

● Fixed an IME lock issue, which sometimes happens to people who choose to use the older version of Pinyin IME.

● Fixed the problem that explorer.exe would crash if you press ALT + F4 while ALT + Tab is open.

● Fixed a configuration failure that could occur when trying to verify remote sound properties when accessing the computer through remote desktop.

● Fixed some unexpected clipping / scaling when passing OOBE on some ultra-wide monitors.

● When your fingerprint is not recognized on the login screen, the apostrophe in the error message should now display correctly.

● Fixed the bug that caused some Insider PCs to perform an error check when coming out of sleep mode recently, resulting in the error message “SYSTEM_THREAD_EXCEPTION_NOT_HANDLED”.

● Fixed a possible deadlock related to MediaPlaybackCommandManager, which caused some applications to sometimes not be able to play media.

● Fixed an issue that caused the report in Reliability Monitoring to unexpectedly go blank when viewing more information, with only an empty rectangle.

● Some work has been done to help resolve the issue that is causing some games to have some lags, these lags are only noticeable when the window is in focus. As a reminder, if necessary, please refer to the following documents to submit practical feedback on the game’s performance.